Being Bilingual Isn't Always Awesome, Except When It Is.

So, fun fact, I'm bilingual. English is my mother tongue.  French is my second language. By French I mean Canadian French for those of you that are purists. 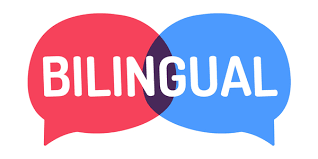 Now when I say bilingual, I really mean mostly bilingual. The level of my bilingualism is directly related to how much French I've spoken recently. It is also related to the proximity to the person I'm speaking French to.  If I'm standing right in front of the person, it is much easier to communicate because I can start using hand gestures and see from facial expressions if I'm saying the right thing. The hardest for me is talking over the phone. It takes away my all my safety nets.

Keeping all this in mind, please picture the panic I felt, when recently, a client of mine who is francophone needed to do a live directed session for a recording I was delivering to them, over the phone.

I was totally freaking out.  This is my worst nightmare.  Not only do I have to speak French to someone over the phone, I need to do it with a client.  I need to keep this as professional as possible, which for me is almost impossible. The bulk of my French language skills involve swear words and substituting English words whenever I get stumped. Remember, I said Canadian French.

This directed session also came after 4 rounds of back and forth over a 5 word tag for a television commercial.  5 words, how hard can it be?  After a week and a half of back and forth, I can tell you, 5 words can be impossible.  This is also why being bilingual can be not awesome.  My client was being very precise in telling me what they wanted, in french.  I was turning that into English thoughts and recording.  Something along the way was being lost in translation, and neither of us knew what was going on.

I'm also on the road this week, that's why the 48 hour turn around on my recording schedule.  This means I'm working out of a mobile studio, built under an ironing board and every blanket in the hotel.

All that said though, as it turns out, being bilingual is actually pretty awesome.  I got into the directed session with the producer and the director.  It was super casual, put me totally at ease and with the two of them giving me direct feedback, we got three separate takes in under 5 minutes (cue the hallelujah chorus).

I can't wait to hear the end result after the commercial is released.

Thanks so much for reading everyone.  Don't forget to share if you know anyone who would find this interesting and if you need anything voiceover related contact me through my website www.mikedurocher.com or by email, [email protected]

Previous There Are Only 5 Ways Restaurant Franchisees Can Grow Their Sales!!
Next A Simple Conversation that Changed My Business.